It is the time of year that most of us in the area look forward to all year and that causes many from far and wide to visit Lenoir & the NC Foothills. Okay, maybe they don’t come only for the North Carolina Blackberry Festival, but you have to admit that it is a “berry” good time to visit! Of all the festivals that take place each year in the Lenoir area, this is one of the largest. The festival brings more than 15,000 visitors to the area each year. Each year, the committees come up with imaginative ways to honor the blackberry. Here are a few highlights from past blackberry festivals:

The 2015 festival was on July 10 and 11. There was a pre-heat party on the 10th with a BlackBEERy Garden on the Square that featured local breweries. Also on the 10th was the Blackberry Princess Pageant preliminaries, Front Porch Pickin’ Competition, Blackberry recipe contests, and the Glow Run 5K and Fun Run. The second day of the festival featured the NC Blackberry Princess Pageant finals, a blood drive, eating contests, presentation of colors ceremony, Colossal Cobbler Parade Brigade, and the world’s largest patchwork of blackberry cobbler with free cobbler while supplies lasted. That was all followed by music from Brown Mtn. Conspiracy Band, Jonathan Dale, Sycamore Bones, and James C. Harper School of Performing Arts. 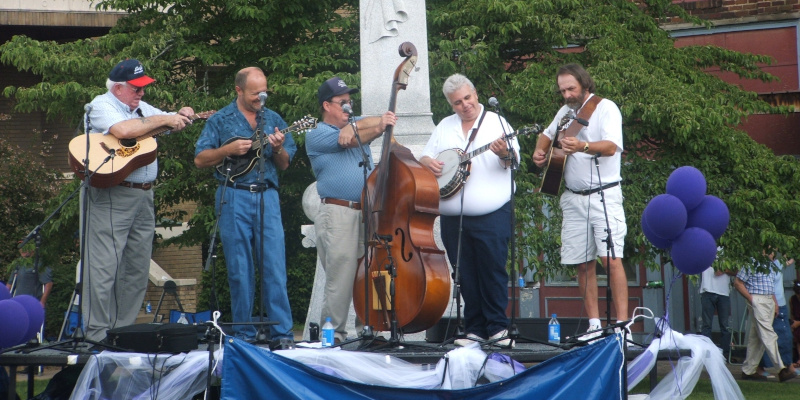 The 2016 festival was on July 8 and 9. It had the same activities as the 2015 event, with the live music being performed by Shelby Rae Moore, Tyler Cannon Trio, and Love Like This Music.

2017 saw a few changes to the way the festival had been in the past. One notable difference was the addition of “An Evening of Everything Blackberry,” held on July 6, the evening before the rest of the activities. The usual activities were scheduled on July 7. As for July 8, live music was performed on various stages at different times instead of how it was done previously. Another change is that the event went another day to include a jazz brunch from 10 am to 2 pm on July 9. It was held at 1841 Café on Main Street.

The 2018 festival ran from Thursday, July 12 to Saturday, July 14. Thursday evening was “An Evening of Everything Blackberry”. Friday, July 13 had one notable change over past festivals with the addition of the Blackberry Singer-Songwriter Competition. On Saturday, in addition to regular activities, there was live music by Rooted, Melissa Reaves, Shelby Rae Moore, King Bees, and Bob Sinclair and the Big Deals. The evening event was titled, “Blackberry Bites, Brews, and Blues” and featured local breweries, vendors, and food trucks, as well as Internationally known Sandra Hall, “Empress of the Blues,” and the King Bees performing.

The 2019 festival ran from Friday, July 12 to Saturday, July 13. It was similar to the year before, but included different performers. On Friday, the live music kicked off with Gotcha Groove. Performers on Saturday included Darren Bryant, Mitch Clark, Masten Cloer, Chad Triplett, Two Lane Blacktop, Chico and the Man, and Alter Ego. One addition to the lineup of activities is that on Saturday night, many headed over to Walker Stadium for the Lenoir Oilers vs. The Statesville Owls “Blackberry Pitch” game.